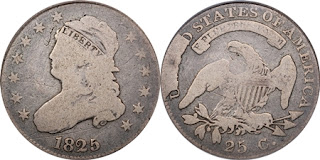 We have a number of contributions this week.  First, Glenn Peterson writes about the upcoming Bust Quarter census:

You may use any format, but if the template written by Winston Zack is helpful.  You may send me the census of the first chart of this template (MS Excel file):  https://gallery.mailchimp.com/74a0e3c37d154d935bdeb2daf/files/Quarter_Template.xlsx

Next, a note from Garrett Ziss:

When you get a chance, check out the interesting article on JR Newsletter Editor, Richard Meaney, in the September issue of Coin World (page 144).  In the interview, Paul Gilkes covers topics such as Mr. Meaney's early coin collecting interests, his focus on bust half dimes, his editorship of the JR Newsletter, and his distinguished military career.

Finally, David Perkins wrote with a story from his recent experience using the Newman Numismatic Portal (which can be found on the internet at this link:  https://nnp.wustl.edu/):

Have you spent any time on the (Eric) Newman Numismatic Portal?  As a collector, researcher, and author on the early United States Silver Dollars 1794-1803, I’ve been following the progress and waiting for certain documents to be scanned and posted to the Newman Portal.
Len Augsburger was kind enough to forward a link to me to the Burdette G. Johnson (BGJ) Invoices for 1940-1947.  As most readers know, Eric P. Newman (EPN) and BGJ purchased much of the Col. E.H.R. Green Collection estate, including all of the early dollars 1794-1803.

I was looking through the invoices on the Portal yesterday and early this morning, focusing on collectors and dealers that I know had an interest in the early dollars.  One of the obvious collectors was F.C.C. Boyd.  His large and mostly complete early dollar collection (by Type and Die Marriage) was sold by Numismatic Gallery at public auction on January 20, 1945 and was titled, Part I / World’s Greatest Collection (WGC) of United States Silver Coins.

The second Boyd invoice was even more interesting to me, and will be to those who collect by die marriage.  The first dollar was a 1795 Flowing Hair Dollar described as, “Haseltine-8.  Very fine, extremely rare” at $40.00.  This coin was sold as Lot 9 in the 1945 WGC, where cataloged noting, “A very fine specimen with wear on high spots of head and eagle; sharp stars and lettering.  This is an excessively rare variety and Hazeltine (Sic) stated “have seen but a single specimen.”  It realized $75.00 on a $100.00 estimate, or approximately double what Boyd had paid for it in 1943, only a couple of years earlier.  Thus we can add the Col. Green pedigree to this famous coin, which now reads, Col. E.H.R. Green-F.C.C. Boyd-M. H. Bolender (and the Bolender Plate Coin)-Kenneth P. Austin-Alfred and Jacque Ostheimer-H. Roland Willasch-James Mathews-Warren Miller.  This important coin is currently for sale as part of the Miller Collection.  It is graded PCGS XF40, and is the only 1795 H-8, B-8, BB-18 Dollar graded by PCGS.

The second 1795 FH Dollar on the invoice was listed as, “H. 10. Unc., semi-proof surface at $75.00.”  This die marriage was an R-7 at the time, with maybe 3-4 examples known.  It was the highest graded example of all examples known at this time, and remains so today by some distance; the next closest example known to me is the Miller Specimen, graded PCGS XF45, which was sold as part of the Miller Collection and now resides in a prominent Eastern collection. There are 13-14 examples known to me for the H-10, B-10, BB-22 die marriage, depending on if one of the known examples is the Haseltine Specimen (1881), or not.  We also now add Col. Green to the pedigree, making it H.O. Granberg-F.C.C. Boyd (WGC)-Harold Bareford-James Matthews-“Various Intermediaries-Dr. Robert Hesselgesser.”  It was sold by Ira and Larry Goldberg as part of the extensive Hesselgesser early dollar collection.  It’s location is unknown to me today.  It has sold in the past at a low six figure price, many multiples of the $75.00 price that Boyd paid in 1943!  In 1945, it sold for $150.00 on a $110.00 estimate.

The third item of curiosity for me was a 1795 “Fillet Head” Dollar (today called “Draped Bust” by most) with a “Counterstamped head of the sun (? Best I can tell), described as the “only specimen of this counterstamp we have ever seen.”

The last item on the invoice was a 1799 Silver Dollar, “Counterstamped with head of Benjamin Franklin.”  It was called Very fine, and sold for $40.00.  If anyone knows anything about this important counterstamped Dollar, please contact me at wdperki(at)attglobal.net

I have never seen or heard of this, despite a  strong interest in counterstamped Early Dollars 1794-1803. Neither of these counterstamped dollars were part of the 1945 WGC Sale.

I’d like to thank Len Augsburger and Eric Newman for their vision and for posting so many valuable items to the Newman Portal.  I can’t wait to see more of “what is out there!”  Thanks.