Raymond Hale wrote:
Thanks to my uncle, who gave me his Indian cent collection, I started collecting coins about 14 years ago. I quickly fell in love with Indian-Cent variety collecting. Then I decided to also build a type set. When I picked up my first Bust Half ( an highly-lustrous, prettily-toned, 1834 Lg date, Lg letter), I fell in love with its' design.
As a practicing historian, I strive to learn as much as I can about the history of our coinage.
When I started reading about Bust-half die varieties, I was hooked. I soon decided to assemble an over-date set. By this time, I was about a "4" on the "nut" scale. I started scouring every dealer site and auction listing I could find. Of course . . ..
I just picked up an 1819 over 18, in a PCGS 50--it's a beautiful 50, too.
While I bought it as an over-date--the 4th of the 15--I was pleased to find that it is an O-103. (I thank my newly purchased Digital Rag for that.)
I am confused, though, about its' rarity rating: If I am quoting correctly, the Overton, 3rd ed. lists it as an R3; the 4th ed as an R4; the BHNC consensus--as quoted from Stephen Herrman is also R4: and, Stephen Herrman, in his auction listings, has it at R5.
Is this my first R5 cherry pick? I would certainly love that. I was practically giddy at finding it to be an R-5 variety. Thinking " now I know what it feels like!" I can't wait to find an R7!  And this is my first acquisition, since buying the RAG.
While not the most important issue, I would appreciate any information you might offer on this coin's rarity. Thanks for all the great reading!
------
From Jim (who sent a photo of a neat Seated Half earlier):
It just dawned on me this past week (better late than never?) that I had gotten two different newsletters mixed up recently and accidentally sent you that 1861 Seated Half photo, when your newsletter is obviously only for silver Bust coinage.

I do like the various Draped and Capped Bust series also although  I am not a variety collector. I'm attaching a pic. of one of my Draped Bust halves (a 1807 PCGS F-15) for your perusal this time. Feel free to post it in the JR Newsletter if you can use it for any reason. 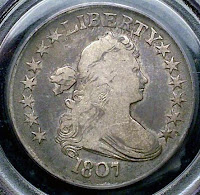 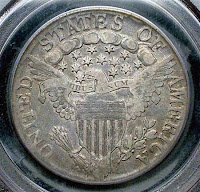 I know a lot of you are not half cent collectors, but many of you may know Bob Yuell.  Bob has collected half cents since the 60's and has assembled a top-tier set over that time.  You can also tell by his EAC #218 that he is a long-time member of our club.

Many of Bob's coins are condition census level examples.  Bob has been known as a "picky" collector, thus his collection consists of choice material.

Even if you have no interest in the Little Half Sisters, it would be nice to wish Bob the best with his health conditions and with the sale of his collection.  It is a gut-wrenching decision to sell your precious copper "babies".

Mike Spurlock
------
Richard Meaney wrote:
Those of you interested in capped bust half dimes may want to check out an item that Heritage sold in the Long Beach auction.  Lot number 7727 was an unattributed 1836 LM-1.1 in a PCGS MS-61 holder.  With buyer's premium, it sold for $4,887.50!  Anyone out there want to fess up to winning it?  To whomever that is adding it to his or her collection, congratulations!
I also had some good luck recently, just added this raw 1831 LM-3 to my collection: 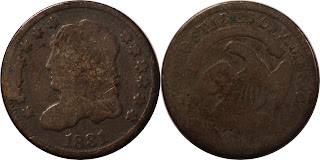