No contributions this week, so I thought I would share this recent purchase.  I saw a lot of six cull half dimes on eBay that looked pretty innocuous/lousy.  The obverse photo looked like this: 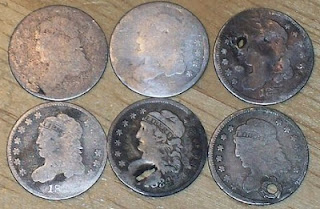 A quick assessment of the coins told me that they had a host of problems (damaged, cleaned, bent, holed, etc.).  Nonetheless, being the persistent half dime collector that I am, I decided to take a quick look at the reverse picture.  In fact, I was surprised there even was a reverse picture, since too many sellers of culls on eBay don't provide reverse images.  So here's what I saw when I clicked on the reverse image: 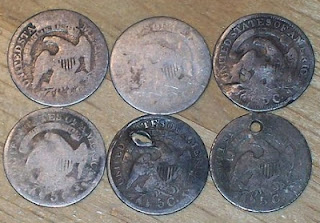 Immediately, my attention focused on the coin at the top left.  I recognized that cud as one of the rare cuds in the half dime series.  The cud in that location is found on the 1832 LM-10.4 remarriage.  It is estimated to be an R-6 insofar as rarity is concerned (and I think it is a high R-6 at that...some might term it an R6+).  One of the neat things about this remarriage with the cud is that the position of the cud on the reverse is nearly directly opposite the date on the obverse, so due to the presence of the cud, the date does not strike up fully (or at all, in some cases!) on this remarriage in its latest die state.  This coin was obviously very worn, but only hints of the date are visible in hand, which is to be expected.  So I entered a bid and ended up winning this lot of coins for sixty one dollars...no doubt far more than the seller could have expected.  I haven't seen many of these and suspect that I got a really, really good value for my money with this purchase.  It is a duplicate, but when it comes to rare cuds, one can't bypass such an opportunity!

Richard Meaney
Posted by Editor, JR Newsletter at 8:35 AM No comments: