Jim Matthews wrote:
In response to Rick Beale and E. Padget's interest in the 1836-1839 Reeded Edge half dollars...
I have Jules' notes on the series and have meet with a couple of collectors to discuss a possible update of his die variety guide. I would like to meet with anyone else who collect these coins by variety to put together an update on this reference. Jules was fascinated by this short lived series, in part because the Reeded Edge half dollars were utterly overlooked by most collectors. Many coins show interesting die cracks and evidence of clashing. As the dies for the Reeded Edge halves were hubbed the placement of stars and legends no longer varied, so identifying particular varieties involves finding unique characteristics to each die, sometimes small lumps, engravers marks and eventually clashing and cracks that are all used for identifying the individual die pairings.
Anyone who would be interested in comparing notes, updating new die varieties and rarity ratings is welcome to contact me and hopefully enough information will be forthcoming to produce an update to this pioneering work on the series. I can be reached at bustdollar (at) yahoo.com
------
Brad Higgins wrote:
Below are two images from the New York Weekly Messenger and Young Men's Advocate dated Wednesday morning, August 28th, 1833. It appears that this snippet was lifted from the Saturday Evening Post.
What strikes me is that in the description, the writer describes how the planchets drop on a slide directly onto the die. No mention of a collar. This coincides with what Craig Sholley mentioned at the ANA forum on minting technology. Just thought the readers of the weekly list might enjoy this.
Editor's note:  Click on the images to enlarge them. 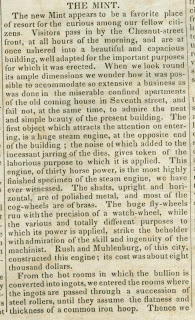 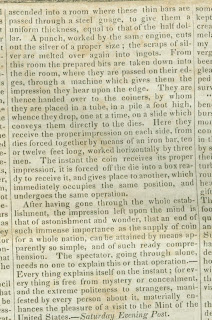 
Rick Beale wrote:
Who's handling the sale of the Bob Yuell collection ? Is it in auction ? Is there a catalog ?
Also:
Regarding David Lange's comments about adding Reeded Edge Halves to the Overton book:

However, that analogy also proves it can be done, as indicated by the success of Bob's Late Date book. Many other coins whose master dies were made from nearly complete hubs have die variety compilations, even coins as recent as Indian cents (with thanks to Rick Snow).

I thought I had seen a compilation of Reeded Edge die varieties as a PDF on the Heritage web site some time ago, but I can't find it now. If the scholarly research portion of the work has been done, it seems reasonable to update it and include it in the next version of the Bust Half reference.

Anything less seems unfair to a beautiful and wonderful series of coins, which heretofore have been neglected. They should have Overton numbers.


We have one more Draped Bust Half Dime we are selling (details follow).
Thanks, Liz Coggan, J J Teaparty, Inc.
RARE 1800 DRAPED BUST HALF DIME LM-2 RARITY-7 CHOICE FINE CONDITION.
TO BE OFFERED FOR BIDDING IN BALTIMORE, MD AT THE WHITMAN COIN AND COLLECTIBLES SHOW, MARCH 30-APRIL 2, 2011. THE COIN WILL BE SOLD VIA SEALED BID. THE AUCTION CLOSES AT 2:00 PM SATURDAY. PLEASE PLAN TO STOP BY OUR TABLE #508 TO SEE THE COIN IN PERSON 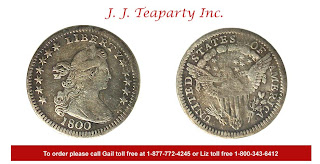 Posted by Editor, JR Newsletter at 9:28 AM No comments: