Editor's note:  LOTS of information this week, please take your time and be sure to read all the way through to the end (especially if you collect early halves!)

Last chance to make suggestions for coins to study at the upcoming EAC/JRCS convention! If there are no suggestions the decisions will be made by the officers. If you are going to be there please let us know what die marriages you want to study. Final decisions after the Baltimore JRCS meeting Friday afternoon. Please check the Whitman website for more information.

If you are coming to the show please bring a show-and-tell coin to share with the other members in attendance. We look forward to having a good crowd for our first Baltimore show meeting. Come one, come all and bring a friend!
------


PCGS apparently calls all "L" counterstamped Bust quarters "damaged";  only NGC will give those coins a numerical grade.  I will be getting the coin back from PCGS and will let the dealer know I bought it from what happened on the coin.  Plus PCGS called it a much lower grade level than I expected.
The "Browning 3" 1825 in the PCGS XF40 holder I sold at Great Collections for $1400.  Also I sold a number of bust dimes and some seated material.  They were all good for grade, purchased raw and PCGS graded.  Anyone who has interest I will share the images.
Regards,
Tom Little
------
Michael Sullivan wrote:

I would like to thank collector Pete Mosiondz, Jr., book dealer Bryce Brown, and early dollar enthusiast and researcher David Perkins for information on the HIGHLANDER COLLECTION.
An auction catalog search, communication with collectors, and contact with PCGS had been under way.    David Perkins' effort to locate the HIGHLANDER Early Dollar registry set did provide a descriptive match with the 1795 BB-52 XF-40 in my collection.   Unfortunately, the registry set lacks photographs for the "definitive match", but I am very pleased and appreciative of the added insight on my collection.    I learned something new which is what makes this hobby so enjoyable.
If other collectors would like to add to this discussion, feel free to contact me at numisbookmjs (at) gmail.com.
Michael Sullivan
------
David Quint wrote:
I want to pass along to other collectors that I have recently had a lot of success selling some of my bust dime duplicates on eBay (just sold a bunch over the past month). JRCS member Bill Hancock basically does this for me as I'm not interested myself in dealing with the eBay selling process (while this isn't an ad for him, I must say that he's done a terrific job on my dupe circulated early dimes). By setting the reserve levels low, we have found that there is tremendous interest in virtually any variety. For those of you who like the idea of selling to the highest bidder but don't want to deal directly with eBay buyers, the listing process, etc., the level of interest in early silver on eBay is really quite good in my opinion compared to just a few years ago, and there are people out there (like Bill) who can make the process pretty painless.


Chuck Allen wrote:
In looking at some pics of a coin I was interested in buying, which I wondered if it was the elusive R.6 Lapped Die State O-116a, I looked at many detailed photos of O-116's ( for several hours ) and noticed a detail not mentioned in Overton, and thought it appropriate to mention it here for some discussion and possibly inclusion in future attribution information.
The most noticeable detail not mentioned is a graver slip or die line protruding straight back off the outer top rear of the top arrow, specimens under VF20'ish seem to possibly depend on strike but anything above that (including details/ cleaned coins), there was no problem seeing the line.
Is it a graver slip (trying to touch up the arrow), or is it a die line?
In comparing the 116 to the suspected 116a, the leaf /stem and berry stem connections were hard to see with the resolution of the pic and a straight on view so, I drew 2 lines, one from the tip of the olive stem to the a point where the arrow shaft and left "toe" of the right claw meet and notice that on the 116, the talon tip touches the line. When I drew the same reference line on the coin I thought was the 116a, the talon tip falls noticeably short of the line. As I thought on this, I concluded that if an impression in a die rises at an angle to the surface, and you removed some of the surface, the impression would be reduced in size in the die and show a reduced device on the struck planchet.
I now have the coin and included better pics of berries and leaf detachment. BTW, the graver slip is gone , lapped away, and also on the obverse, only the slightest hint of only the deepest recutting point ( the one with the arrow in Dr.Glenn Peterson's "The Ultimate Guide To Attributing Bust Half Dollars" book picture # 712) is discernible at an angle with light just right on  S-12 on the obverse, which I understand was lapped also
Thanks to Steve Herrman, Tom Palmer, and Dave Manevitz for looking at the pics and giving me their valued opinions.
Any comments would be appreciated -- Chuck
e-mail  DC44A (at) aol.com
editor's note:  clicking on these pictures will open up a much larger and more useful version of the same image. 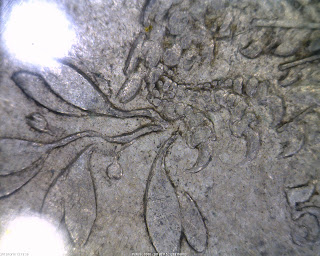 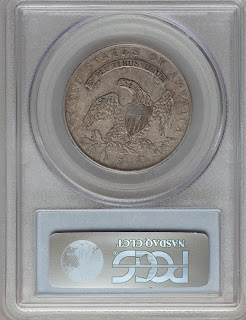 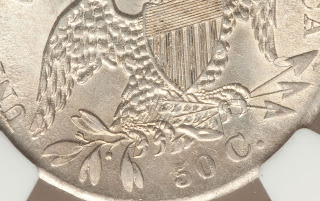 Sorry I've been absent so long--too many weeks on the road and never enough time at home to catch up.
Important Capped Bust Dime collection coming up for auction at the ANA Auction, virtually complete by die marriage from 1809 through 1837 including many of the rarest varieties in high grades. Furthermore, a separate group of rare die marriages has been consigned to our June Auction in Baltimore, including a few Rarity-7 (1827 JR-10 dime) and several Rarity-6 die marriages from cents to half dollars. More on these important collections to follow as the coins are reviewed and cataloged.
I have not found anything new in half dime or dime cud department, but Winston seems to be on top of that lately!
Jim
------
David Kahn wrote:


Although I must apologize for such late notice, I am very pleased to announce that I will be offering the complete, 563-piece Bust Half dollar collection formed by Hall Arnold of Charlotte, NC at this week’s Baltimore Coin Expo.

There should be something of interest for virtually any collector.  Among the 563 coins are examples of virtually all dates from 1795 through 1836.  Well over 1/3 of the coins are slabbed, including 59 that are freshly back from PCGS within the past week.  Grades run from Good thru AU-58, and many significant and affordable Overton rarities are included.

Please do not hesitate to contact me by email or phone, and I will be happy to provide more information and answer whatever questions you may have.  If you will not be in Baltimore, please try to make arrangements with another collector or dealer who can view coins for you and help you make any purchase decisions.

I look forward to seeing many of you on Friday morning.