Before we get to this week's contributions, please note that I will not be able to publish a newsletter next week.  Contributions received between today and June 17th will be published on June 17th.

In response to Rick A's post in the 5/20/18 JR Newsletter about reduced size bust quarters and his cherry pick of an 1835 B-3 PCGS VF25...
That's great to hear about your recent cherry pick, and the others you have accumulated.  I believe there are good buys in the lower grade reduced size bust quarters for those that want to collect them by year, Red Book variety, or die marriage.  While the higher-grade coins are going to attract the higher prices and increased attention if they are condition census for a die marriage, collectors of the series in the VF/XF or VG/F areas are going to have some good chances at nice prices.

Ricks cherry pick of an 1834 B-5 is a good one with the highest coin graded for the die marriage being two MS62 examples with a census that drops quickly to lower grades.  Considering the low mintages of reduced size bust quarters, which always attracted me, it's nice being able to find the difficult die marriages in lower collector grades.  The reduced size bust quarters are also very interesting to study with all of the die marriages that late die states with many obverse and reverse die cracks along with clashing.

I’d like to announce that W. David Perkins Numismatics will be holding another Extraordinary Dime and Half Dime Sale at the 2018 ANA World’s Fair of Money in Philadelphia in August.

As in our past sales, some lots will be offered via Fixed Prices and others through a Sealed Bid Sale.  The sale will offer examples for those collecting by date, type, die marriage, die state, and for those who like to own an example pedigreed to some of the great collectors of the past and/or one plated in one of the reference books.  In this case, this means Eliasberg, Gorman, David Davis, Russ Logan, and others.  Rare die marriages consigned at this time include a fair number of R-4 to R-6 die marriages.

All coins will be photographed in color (a few sample photos below) and described in detail in a catalog that will be sent electronically to all of those who are on my early half dime and dime distribution lists.  If you would like to be added to either or both distribution lists, please send your name and e-mail address to me at wdperki(at)attglobal.net.  If you are not sure if you are on one or both of these lists please send me an e-mail and I will verify this for you. 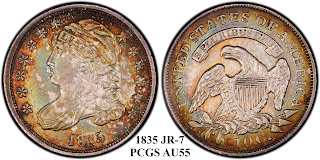 Posted by Editor, JR Newsletter at 1:24 PM No comments: