This week's JR Newsletter is a rather robust presentation of news and information.

First, Brad Karoleff wrote in response to John Okerson's question about JRCS participation at the EAC meeting.  Brad also wrote about other subjects:

In response to John, there will be no official JRCS participation at the EAC conference this year.  There will be a couple of dealers that have crossover coins that will be attending the convention.  I have not seen any list of the educational seminars scheduled as of yet.  If you decide to attend the show I'm sure you will have a good time and see many wonderful coins, some may even be silver!

I would like to encourage anyone working on something for publication in the John Reich Journal to submit it to me as soon as possible.  I am scheduling a spring issue, around March, and we have to have one out pre-ANA, July.  Currently the cupboard is pretty bare!  I look forward to an avalanche of information for publication this year.

Finally, from the editor:
I blame it on Skynet ;)

In response to our e-editor with apologies for spelling errors....

Hasta la vista and I'll be back!

I am a moderately new member of JRCS – #1475.  I have purchased a few of the back issues from Bryce Brown.  The LSCC folks offer Collective Volumes 1 through 5 which cover multiple years within a single volume.  While not up to date, it makes a great step forward for someone just starting and is substantially cheaper than buying a complete collection.  Has there been any discussion about doing such a series of our books?

An alternative might very well be to provide or at least to offer a DVD containing all of the past issues the way EAC does when one subscribes to their group.

The 2015 JRCS Silver Dollar Census for the early silver dollars 1794-1803 will be published in the next issue of the John Reich Journal.  If you are a JRCS member and have not yet sent your early dollar Census information to me, please try to do so in the next few weeks.

If your collection was included in the last census (which was published in Volume 21 / Issue 1, February 2011) you may send changes and additions only, if you like.  I do have one new and fairly substantial collector’s Census.  And so far, none of the censuses submitted include an example of the newly discovered 1803 B-8, BB-157 die marriage!  Keep looking.

At a minimum, please include date, Bolender (B) and / or Bowers-Borckart (BB) numbers, your numerical grade (raw, NGC, PCGS or other).  Some members include die state information, pedigree and other decriptive information.  This is welcome if you would like to include it.

As always, I welcome your questions, comments and suggestions regarding the rarity ratings for the early dollars.

If you have any questions, please don’t hesitate to contact me at wdperki (aT)attglobal.net . You may send your Census to me at this e-mail address, or mail to it me at

And the final contribution is one you won't want to miss:

David Finkelstein wrote a two-page article entitled, “Weights & Measures Of The First U S Mint” and provided it here for readers of the JR Newsletter.

Weights & Measures Of The First U S Mint

So which system of measurement did the first United States Mint use?  The numerous documents and log, ledger and warrant books that are stored at the National Archives and Records Administration (or NARA) in Philadelphia provide the answer.  Figure 1 is the first entry in the Bullion Waste Book, and is dated July 18, 1794.  It specifies that the Bank of Maryland made the first silver bullion deposit.  The gross weight was 94,532 ounces 0 pennyweights (abbreviated as dwts), and its standard weight was 69,953 ounces 13 pennyweights.  Since the weight included pennyweights, the Troy weight system was used to record gross and standard weight, as the Avoirdupois weight system does not use the pennyweight measure.

(Editor's note:  click on either image to open a larger version)

So one would think that the first United States Mint weighed metals utilizing Troy counterweights on an Equal Arm Beam Scale (invented around 5000 B.C.), a Steelyard (or Roman) Balance Scale (invented around 500 B.C.), or a Roberval Scale (invented around 1660).  If you thought that, you would be wrong.  Figure 2 is part of an entry in the Bullion Waste Book, dated August 24, 1794.  It specifies that the silver deposit made by the Bank of Maryland was not weighed correctly due to “the inaccuracy of the Avoirdupois weights by which it was first weighed”.  One can infer from this entry that the silver deposit was weighed on a scale that utilized Avoirdupois counterweights, then the Avoirdupois weight was manually converted to its Troy weight equivalent. 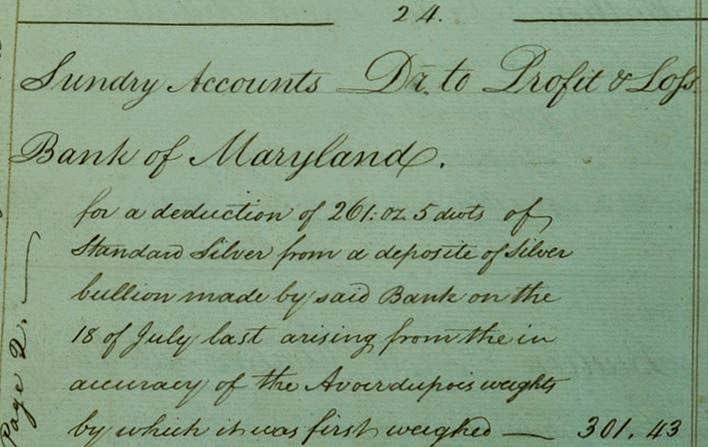 Posted by Editor, JR Newsletter at 1:15 PM No comments: