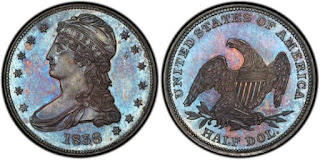 
An interesting triple struck 1837 Half Dollar

Thought I would document an interesting find for the enjoyment of the JR Newsletter readers (I will write this up in more detail later for the JRJ). Late last year while checking half dollars on eBay I noticed an odd looking 1837 reeded edge half dollar with an obverse that looked much like the double-profile bust half dollars of earlier decades, though exhibiting a significantly greater offset than the typical double-profile coins (Figure 1).

Assuming this was a very wide double profile coin I was expecting, much like most of the lettered edge double-profile coins, a reverse that was not doubled. However, when I checked the reverse image there was a clear and widely offset eagle’s head (Figure 2). Since the coin was a Buy It Now it was a no-brainer purchase.

A few days later the coin arrived and I could examine it in greater detail. Upon closer inspection the coin was not just double-struck, but actually triple-struck with an impression of the folds of the cap on the rim above the cap that was likely from an initial ~10% off center strike (Figure 3). This is the only evidence of the third strike that remains. The other two strikes were properly centered but rotated by about 6-8 degrees. This shows clearly in the shield (Figure 4) which shows both rotated and offset pales and guiles.

Neat coin. Enjoy the images. But someone explain how a major dealer could have missed this?

P.S. The variety appears to be GR8 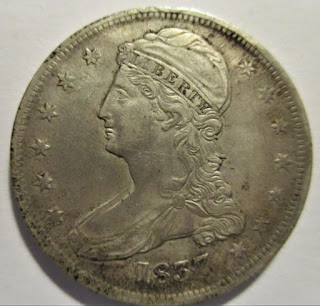 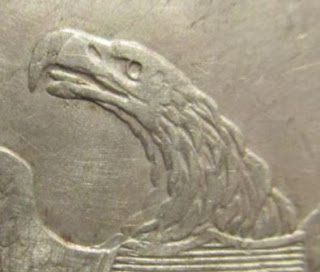 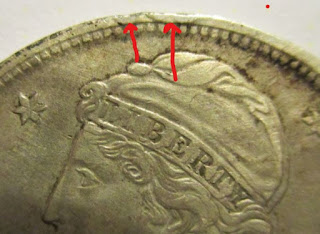 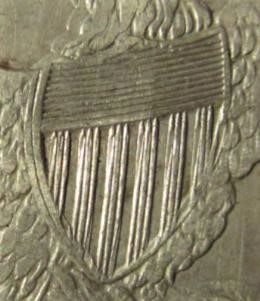 Figure 4
Posted by Editor, JR Newsletter at 1:20 PM No comments: