This week, the JR Newsletter brings LOTS of information to you.  For starters, we are fortunate to have David Finkelstein sharing his findings on topics from the early US Mint.

Silver & Gold Registers Of The First U. S. Mint
By David Finkelstein

The first U. S. Mint utilized multiple log books.  When similar log books are analyzed, different handwriting styles can be observed.  This indicates that some of the logs were maintained by different officers or clerks.  Although partially redundant, these logs most likely assisted in the quarterly balancing of the monies and precious metals that moved throughout the Mint on a daily basis.  Four similar log books that are stored at the National Archives and Records Administration in Philadelphia are as follows: 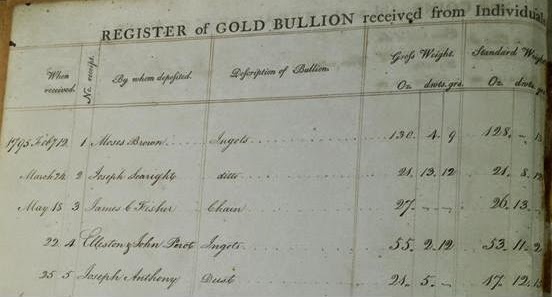 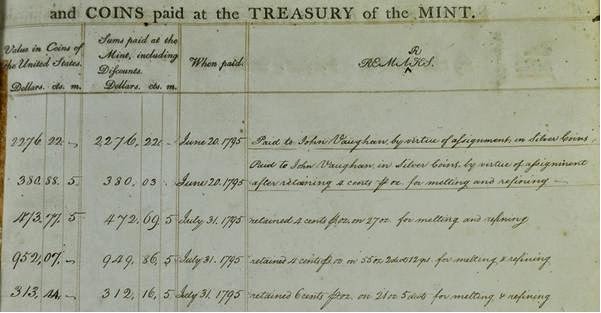 Figure 4 shows an interesting entry made in the Register of Silver Deposits.  It is for silver certificate number 57, issued on June 19, 1797.  The deposit was valued at $300.00.  The depositor was Thomas Jefferson, Vice President of the United States.

The four log books described in this article assist researchers in determining the endpoints of the timeline for each bullion deposit and coin return.  What about the phases that occurred in-between?  To be continued…
------

Next, John Okerson wrote with an inquiry concerning early quarters:


I would like to find a conversion table for Early Quarter dollars from the numbering used by Robert Duphorne to the Browning standard in use today.  Duphorne published The Early Quarter Dollars of the United States in 1975.  Louis Scuderi wrote about him in 2005 in JRCS Volume 18 Issue #2 of June 2007.  Not long after that article both Steve Tompkins and Rory Rea and all published new books on the same series.

Duphorne’s book may not be mainstream but is available online currently at about $20.

Anyone having this information is requested to share it with johnokerson(at)gmail.com or participate in correlating the data in the books.

Why no participation at this upcoming EAC? I was told by an officer of EAC that this was not decided by EAC. The joint meeting and information sharing seemed to work rather well.I feel that the members of JRCS should be given a good answer for this change.

The 1838-O Half Dollar, An Alignment of the Stars, by Kevin Flynn and John Dannreuther is now available. 8-1/2 by 11, 100 pages, softcover only.  The following is a summation of this incredible variety.

To meet the increasing demand for coinage for commerce, Congress authorized three new mints in 1835.  One of the chosen locations was in New Orleans, a city strategically located on the Mississippi River that would help in disbursing coinage throughout the south and west.  The Philadelphia Mint supplied equipment vital to coinage production such as three steam powered coining presses, each of a different size.  David Bradford was hired as the Superintendent of the New Orleans Mint with Tyler Rufus employed as the Coiner.  Robert M. Patterson was the Director of the Mint from 1835 through 1851.

On May 8th, 1838, Tyler struck thirty dimes on the small coining press before having mechanical problems.  One specimen was sent to Director Patterson, ten were put in a cornerstone of a new building, with the remainder being given out as mementos.  Additional dimes were struck up through July 1838.  Between August 2nd and November 1st, the New Orleans Mint was closed because of yellow fever.  Dimes and half-dimes were struck in December and the beginning of January 1839.

On January 17th, 1839, Director Patterson stated that no time should be lost in getting ready for the coinage of the half dollars.  Between January 17th and the end of January, Tyler was able to get the large coining press into operation to be used for the half dollars. Tyler found that the half dollar working dies were too short to be held in place by the screws.  In order to test the large coining press, he built a support system to raise the bottom working die to reach the screws.  He was able to strike ten "excellent impressions" from a single set of 1838 dated half dollar working dies before the support system was crushed.  The time frame in which these ten 1838-O half dollars were struck is based upon a letters from Rufus Tyler on February 25th and Superintendent Bradford on March 7th.  Bradford stated in his letter that Tyler had struck a few half dollars in the middle of January on the large press.  No 1838-O half dollars were submitted to Philadelphia for the annual assay sent on January 17, 1839.  The fields of these ten coins exhibit a brilliant surface texture expected from a new pair of working dies.  The striking characteristics of the design elements and rims are very strong.

Price for the softcover is $29.95. To order, send a check or money order to Kevin Flynn, P.O. Box 396 , Lumberton , NJ 08048.  Please include $5 for media shipping or $10 for first class shipping.  Please email me at kevinjflynn88(at)yahoo.com to reserve a copy.  See other books available at www.kevinjflynn.com


Posted by Editor, JR Newsletter at 1:21 PM No comments: