A number of contributions this week!

We still need a volunteer to host the next JRCS meeting at the Baltimore convention on Friday afternoon at 4 PM.

Also, if anyone wants to give a short presentation there we would be grateful.

Please let me know if you can help.   Bkaroleff (at) yahoo.com

Fellow JRCS Members and, hopefully, bibliophiles -- below is an image of one my most recent project to bind my JRCS Journals.    The binding was executed by The Harcourt Bindery in Boston.   The binding is black grained cloth with dark blue spine labels including my personalization on the front board.    Bound into this set of JRCS Journals is many elements of club ephemera (supplements, voting documents for articles of the year, the club bylaws, etc.).    I would encourage any serious early coinage collector to have their set of JR Journals bound to preserve a phenomenal collection of information and insights not found in standard reference works.

For perspective, David Davis' personal set of the first ten volumes of the JR Journal bound in leather sold for $1400 in the January 2012 Kolbe-Fanning Auction.   On a personal note, I more frequent bound sets of periodicals than loose issues.    If you need some recommendations on bookbinders, contact me. 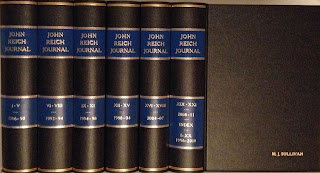 JR News readers,
I am in the process of writing up some research on off center/double struck capped bust dimes, and specifically on multiple examples of the 1823 JR1. I have images of several specimens but have been unable to find an image of Russ Logan's example. This specimen was in the Bowers and Merena 2002 sale of the The Collections of Russell J. Logan & Gilbert G. Steinberg and Part III of the Jay Roe Collection and listed as Lot 2047 (1823/2 Capped Bust Dime JR-1. Rarity-3. Small E's. G-4). It was described as:

"Double Struck. The first strike was approximately 40% off-center at 1:00 and rotated 10 counter clockwise from the final position of the second strike. Light gray with prominent hairlines and an area of brownish discoloration at center of the obverse. The reverse is weak and grades just AG-3. The reverse die crack is not visible on this example.
Purchased August 1993 from Henry Hilgard."

Unfortunately the image attached to the lot is incorrect and has been so since the auction was first listed back in 2002. I also can not find my copy of the sale catalog.

I have two requests. First, if anyone (perhaps the current owner) has high quality images of the coin that they would be willing to share I would greatly appreciate having them and would provide acknowledgment (if desired) in the JRJ when the paper is published. Alternatively a high quality scan of the catalog might work assuming the details can be clearly seen.

My second request is for information (and images) on any additional specimens that you might be aware of. I currently have images of three specimens:

If you know of any others and are willing to share information and images that would be greatly appreciated and acknowledged.
If you can help contact me at cirque1 (at) gmail.com

I've been collecting Capped Bust dimes since the authors published the Dime reference in 1984. One of the areas that has always fascinated me was the fact that contemporary counterfeit Capped Bust dimes were also made much in the same style (and likely same counterfeiters) as the commonly seen Capped Bust half dollars of the 1820s and 1830s. One troubling aspect of the dime denomination is how frustratingly rare they are. I've usually tried to buy all I could find and have asked other specialists if they have any examples--or if they have even seen any examples! More often than not the answer is no. It would seem, given how prohibitively rare these early counterfeit dimes are, that most likely not that many were struck. Few specialists have even a single example of one of these contemporary counterfeit dimes.

I have included a picture of an 1831 contemporary counterfeit Capped Bust dime (below) that I purchased this year from another specialist who has been seeking these for many years. Notice how crude the stars are, and irregular placement especially along the right side of the obverse. Similarly the date punches are not quite right, being too small and too low, with the figures clearly a different number font than those used at the Philadelphia Mint. On the reverse, the eagle is a trifle irregular too, along with the arrows  and comical placement of the legend spacing--creating another run-on STATESOF. Nothing about this is quite right, and any dime specialist today would have no difficulty in knowing this coin was not a U.S. Mint product.

So why make a counterfeit dime? Well, for the money of course! While 10 cents today may not buy much, back in the 1830s and 1840s it certainly did. In fact for many people in these early years of our history, 50 cents was a days pay. If a counterfeiter could make enough coinage, and get it salted into circulation without being caught, there was considerable profit to be had. Today through the expertise of Keith Davignon an entire reference work has been published by him entitled "Contemporary Counterfeit Capped Bust Half Dollars" which brings to light much information on this period and offers photographs and descriptions of the various known counterfeit issues by die variety. The style, metallic content and appearance of the half dollars implies that the same makers may well have issued the counterfeit dimes as well.

We know that literacy in the general populace was certainly not that high when these were made. Thus fooling a store clerk or merchant with a counterfeit coin would have been fairly easy, certainly easy enough to continue trying given the number of counterfeit Capped Bust half dollars known today.

I'm planning on writing a more extensive article for the John Reich Journal on each of these counterfeit early dimes that I've acquired, along with further details and photographs. Given what I've learned up to this point, there simply aren't enough coins around to do a reference work, and most seem to be unique or nearly so. I consider these to be akin to folk art, where the ungodly took their talents and created primitive dies, stirred up a batch of seething pot metal (base metals which appeared at least silver-white in color) and created planchets which could be struck.

If any collectors have an example of one of these contemporary counterfeit Capped Bust dimes and would like to share their information with me I would appreciate it.

I can be reached at bustdollar (at) yahoo.com 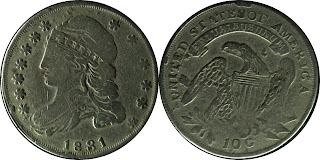 Posted by Editor, JR Newsletter at 8:57 AM No comments: