(editor's note:  click on any image to open a larger version of that image)

Please remember that the Bust Quarter census will be included in the Spring issue of The John Reich Journal.  If you have not yet forwarded your census information to Glenn Peterson, please do it NOW to be included in the census.  You can send Glenn your information at gpeters (at) tds.net or hard copies should be sent to Glenn Peterson, 9301 Park West Blvd, Knoxville, TN 37923.

We still need volunteers for manning the tables at the EAC/JRCS convention.  This is a wonderful opportunity to meet fellow collectors and see many neat coins!  Please let me know if you can help at bkaroleff (at) yahoo.com.

The membership will be receiving a copy of the complete index of the John Reich Journal soon.  We are proofing the final copy as you read this and expect it to be in the mail near the end of Feb or the beginning of March.  This will be provided to the membership at no additional cost as many members have donated money or auction lots to raise the money for the issue.

The Spring issue of the journal will follow soon thereafter.  We can still use a couple of articles or letters to the editor for inclusion in the issue.  We also would like to have some remembrances of David Davis to include in the issue.  Please send them to me at bkaroleff (at) yahoo.com or Brad Karoleff C/O Coins +, 225 E 6th St., suite 1, Cincinnati, OH 45202.  Thank you.

We also need to determine the cover coin for the next volume of the journal.  If anyone has a great photo of a great coin for consideration you can contact me via email for more information.

Remember, EAC/JRCS is sneaking up on us.  Make your plans to attend NOW!

While I sent Van an email of the image of the 1834 JR-4 Capped Bust Dime with a reverse Cud over UN(IT)ED, I think the rest of the JR Newsletter recipients would like to see it so they may be able to come across (cherrypick) one in their future searches.

Jim Matthews sent me some additional information regarding the rarity of the 1825 JR-4 Retained Cud and it is both of our understandings that the population of this die state is around, if not more than 5 pieces extant.  I further informed him that the die did not fail suddenly without first exhibiting signs of die cracking, which he assumed.  The first 1825 JR-4 I picked up (about 3 years ago) shows early signs of die failure with cracking at stars 8-11. The image I'm providing was taken with my digital-camera-microscope.  I still believe this die state is very rare as well, but I could be wrong.  If anyone else has an example which shows these die cracks, or a die state slightly more advanced than what I am sharing please feel free to share photo's if you have any.  (This die crack specimen is a VG-8 coin). 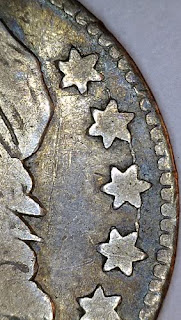 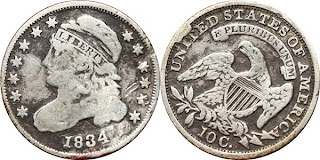 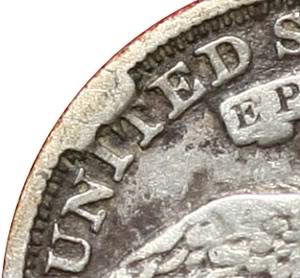 With regard to the EAC/JRCS show, I'd like to put it out there that my guess is that many who want to attend these meetings can not. Perhaps one of the attendees would be willing to bring a laptop and stream the thing live on the internet? Easy for me to say since I'm never there, but perhaps one of those who is planning to be in Buffalo would be willing to do this (that is, if it indeed is the case that there are many more like me who won't be in Buffalo that weekend but would like to participate or listen in on the meeting or presentations)...

Alan Weinberg wrote in response to an inquiry last week by Dick Kurtz:

The copy of the Birch cent is likely the product of the Gallery Mint. They come full blazing red and prooflike and can be acquired at the ANA or Baltimore bourses from one single dealer who specializes in them and other Gallery mint issues. I have to admit they are very attractive and closely resemble the original. It would be interesting to carry one in pocket change for a year til it is worn to say VF and is brown.

The Birch cent has eluded me for 4 decades. I have all the other "collectible" 1792 patterns in choice condition but the Birch cent. There cannot be but 4 or 5  genuine Birch cents of both types in decent collectible condition (Very Good or better). The best one is the mint red specimen sold in Garrett and going directly into the DGP Long Island collection. The last "decent" one (VF) was in Norweb 1988 and is now in the Smithsonian.

Even superbly made electrotypes are super-rare, the few around have gaping lead exposure on their surfaces. I do own the ex-Maurice Gould Birch cent electrotype which is Uncirculated and exhibits no underlying lead even under a good glass. Guess I'll have to die with that.

Like Dave Wnuck I too enjoy collecting early US contemporary counterfeits. From experience gained in collecting these types of coins there are a few points to consider in the study of this 1811 Half Eagle counterfeit:

Hope these perspectives help in the study of this very interesting specimen!

I have this 1836 JR-1 Bust Dime that is in decent condition.  Photos are attached.  The interesting thing about this particular example is that when observing the strike on the obverse, it could be considered slightly off-center as many of the coins of the era often are... and the off-center strike is somewhat evident by the missing denticles above Stars S4-S5-S6-S7 while the rest of the denticles are quite well formed.

On the reverse is a different story... in this case there are NO denticles and there does not seem to be any off-center strike evidence.  It would appear to me that the forming process of the denticles was "missed" for this coin?  I must admit my lack of knowledge for the actual minting sequence and do not have a very clear understanding of the process flow of the forming of the denticles on the obverse and reverse of the coins.  I am hoping that someone in the group with considerable knowledge can shed some light on this coin as to why it looks like it does.

I look forward to hearing from the sages in the group...

Here are the images: 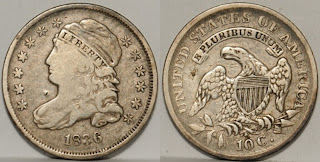 Posted by Editor, JR Newsletter at 8:58 AM No comments: