I have two items from the ANA: #1 more on the missing Davis dimes and, #2 the Tuesday auction session with (most of) Dave Davis' dimes.
I spoke to John McCloskey regarding where were the missing coins found by the family-member search group. After the JRCS meeting ended, I spoke to John.  "Do you know where the Davis missing coins were located?" John indicated he learned this after the success of the search.  Dave hid these because he couldn't return them to the bank.  He had a tall bookcase with books against a wall.  He removed all the books and moved the bookcase from the wall.  The coins were placed at the wall, the bookcase was returned to its place and the books were re-shelved. Due to Dave's illness and medication he couldn't recall where he hid these coins--we all owe his family members our thanks.
I was pleased to obtain eight of Dave's Bust dimes .  While I had recorded the coins of interest to me, I was concerned at the seeming conflict between certain coins designated by PCGS as cleaned or damaged.  I know PCGS as a reputable company while I know the individual who wrote the annotated descriptions of Dave's coins, including those given the cleaned and damaged negative tag.  I carefully examined 45 coins, 16 of which were cleaned or damaged.  Jim Mathews provided objective and balanced commentary which I found invaluable.  My customary practice is to simply pass on such problem coins.  I purchased three such coins and am pleased to own these.
Philip J. Carrigan
------
Bill Kindl wrote:


I spent the better part of Friday (10 AM - 3 PM) at the ANA show in Philadelphia.  Attendance was on the light side; several aisles had very little traffic; I noticed dealers reading their newspaper or on their computers just waiting for people to stop by.  I was very surprised and disappointed as I had expected a much larger attendance.  Several dealers stated it had turned out to be a much better show for "buying".
Bill Kindl
------
David Lange wrote about the "new hot series in bust coins" (OK, that was editor's emphasis added):

Numismatic Guaranty Corporation has begun attributing the Capped Bust Reeded Edge Half Dollar series by Graham-Reiver (GR) Numbers per the newly-published book describing and illustrating each die marriage for this series. These varieties will be included under NGC’s VarietyPlus Service, an adjunct to its grading and encapsulation services.

Author Dick Graham’s book A Registry of Die Varieties of Reeded Edge Half Dollars 1836-1839 was long anticipated, and its release came during the recent World’s Fair of Money in Philadelphia. A previous monograph written by the late Jules Reiver had been employed by some collectors for attributing Reeded Edge Halves, but this proved to be incomplete and very challenging to use, as it included no photographs. The Graham work solves this problem, and NGC determined that this series would make a worthwhile addition to its already extensive and highly regarded VarietyPlus service.

Unlike the Lettered Edge Half Dollars that preceded them, Reeded Edge Halves were almost entirely hubbed, with the final numeral of the date being the only hand-punched element. The distinguishing points of Reeded Edge Halves are thus very subtle, and these coins may be challenging to attribute in grades below VF-20. It’s suggested that submitters bear this in mind when selecting coins for variety attribution.

Persons submitting Capped Bust Reeded Edge to NGC for certification may receive variety attributions by checking the box marked VarietyPlus on the submission form and paying the $12 fee. Reeded Edge Halves already encapsulated by NGC may be submitted for Designation Review at the same fee, and this cost includes a fresh holder.

The NGC website, www.NGCcoin.com, features a complete table of varieties recognized by NGC under its VarietyPlus Service. This table lists the NGC label description and variety number, as well as all applicable cross-referencing numbers. The Graham-Reiver varieties of Reeded Edge Half Dollars will also be included in NGC’s Certified Coin Registry.

I had an absolutely wonderful time at the ANA show in Philadelphia.  I was there all day Tuesday and Wednesday and just one hour on Thursday.  My seven year old daughter attended the show with me.  This was her first major coin show.  I think the longest period of time she had spent at a small, local coin show previously was an hour or two.  Much to my surprise, she had an absolutely great time at the show and seeing the sights (Liberty Bell, Independence Hall) and eating the food (Reading Terminal Market, Philly Cheese Steaks, various ice cream shops).  Katy participated in the ANA's "Treasure Trivia" and the "World Mint Passport" programs along with spending time in the "Kids Zone" and interacting with dozens of dealers and receiving a heart warming reception from just about every single dealer she approached.  The hobby in general and the ANA in particular deserve a pat on the back for the way young numismatists are welcomed and encouraged.

As you might guess, I had little opportunity to look closely at my favorite series of coins (capped bust half dimes) while at the show.  Normally, I visit every table and look at hundreds of half dimes at a large show like the ANA Summer show.  Not so this time.  In order to ensure I could leave the show with one or two coins for my collection, I spent half an hour each at the tables of Doug Bird and Tom Reynolds.  I purchased two nice Classic Head Large Cents for my collection.  Images of each are below: 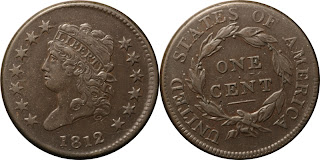 Posted by Editor, JR Newsletter at 8:47 AM No comments: