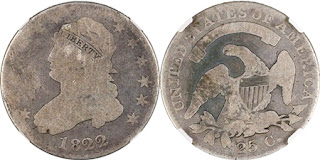 First this week, a request from Winston Zack:


I have a tough puzzle I'd like to see cracked by the CBH experts out there.

A collector sent me a counterfeit CBH to study (see photos). 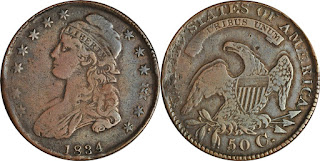 The piece is at least double struck, and probably double struck off-center. But in all other respects this piece appears to be a double-struck transfer die counterfeit. As a transfer die I should, in theory, be able to identify the obverse and reverse die which matches this piece.

Furthermore, the reverse does not appear to match any known Overton reverse used on any 1834's.

Your review of this piece, and any thoughts on obverse and reverse die use would be most appreciative.

Numismatic Guaranty Corporation® (NGC®) has certified an 1822 quarter dollar variety that was previously unknown to numismatists. The new discovery has been cataloged as Browning-3, adding a third variety to the two 1822 die marriages that have been sought by generations of quarter collectors.

The numbering system for early quarter dollars was devised by Ard W. Browning and published in his 1925 book, The Early Quarter Dollars of the United States. Though this reference has since been superseded by two superior works produced within the past ten years, early quarters are still attributed by numismatists according to Browning numbers.
Variety B-1 of 1822 combined Obverse 1 and Reverse R (the reverse dies being lettered sequentially from 1815 onward). B-2 employed this same obverse in combination with Reverse S, which it shared with 1828 B-3. The coin recently confirmed by NGC as a new variety combines Obverse 1 for 1822 with Reverse T, a die used to coin the single varieties of 1823 and 1824 quarters, as well as 1825 B-1 and 1828 B-2. This marriage of Obverse 1 and Reverse T was previously unknown for 1822 quarters.

Reverse T is easily identified by its broken upper arrow shaft and lower arrow head. This same die state is seen on the scarce 1823/2 quarters, but the die was subsequently repaired before use with the three later dates. These 1824/2, 1825 and 1828 quarters reveal an engraving scratch from the lower arrow head that attests to its repair.
NGC was selected to certify this presently unique coin after its owner, a collector in Illinois, contacted Heritage Auctions. His photos were sent to Heritage Auctions President Greg Rohan, who shared them with Senior Numismatist Mark Borckardt and Cataloger John Sculley. It was on their advice that the owner met with NGC Research Director David W. Lange at a coin show, where Lange accepted the coin for certification. It was carefully studied for authenticity, grade and variety before being certified by NGC as AG 3, B-3, Discovery Coin.

The subject coin is worn in a pattern that suggests the dies were not perfectly aligned. Its obverse is more worn at the left, while its reverse shows greater wear at the right. The quarter is naturally toned, with lighter relief elements that give it a slight cameo quality, and a subtle planchet lamination is visible at 8 o'clock obverse. The coin's owner has not announced any plans for his rarity.

NGC will attribute all Browning varieties under its VarietyPlus Service for a fee of $15 above the grading tier fee. Coins already certified by NGC may be submitted to have an eligible variety attributed at this same $15 fee, which includes the cost of reholdering. Learn more about VarietyPlus at NGCcoin.com/VarietyPlus.
------

A reminder from the editor:  if you wish to submit something to JR Newsletter, please write to jrnewsletter(at)gmail.com

Posted by Editor, JR Newsletter at 12:16 AM No comments: