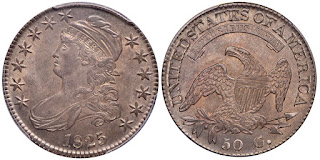 
The Whitman Baltimore Show turned out to be a good one, despite the weather keeping a number of collectors and dealers away.

Those who traveled to Baltimore on Monday or Tuesday had no problems getting in.  Snow and wind were predicted for Wednesday, and sure enough, my morning flight from Denver to Baltimore was cancelled just before I arrived at the airport.  It turns out the Baltimore airport was closed.  I checked with United, and learned two runways were open at Washington Dulles.   I was able to get one of the last seats on this flight, arriving at Dulles about the same time as I would have arrived in Baltimore.  I was told the flight might not be able to land, the pilot had taken on extra fuel in case the flight was diverted, and that the drive from Dulles to Baltimore (a little over 60 miles through D.C. traffic) would be tough to impossible.  I checked, and Uber had “four wheel drive cars” available for only $300.00 one way…

I look out the window of the plane as we landed, and there appeared to be only an inch or two of snow on the grass with much water and a little slush on the runway.  On the way to the baggage, I asked a “limo driver holding a sign” how the highways were.  He said that they were fine for the most part.

I booked a regular Uber for $93.00, and was pleased when I learned it was 4WD Jeep Grand Cherokee (without the $200 premium!), a great vehicle in the snow.  He said the drive might take two hours or more due to the weather and traffic.  I kept asking “where were all the cars?”  Turns out that they had closed the schools, government offices and businesses – there were hardly any cars on the road the entire distance, despite driving during what should have been early rush hour.  We arrived at the Convention Center (security) in a little over one hour.  Where was the snow?  Why did they close the airport?  Oh well, I’m here.

And I’m glad I made it.  Thursday was dealer set up, and Thursday afternoon I was rewarded for my travel efforts when a dealer offered me a virtually perfect and undergraded 1795 Flowing Hair Dollar in PCGS AU50 (CAC).  Less than an hour later this “Wow Coin” had a new home with a very happy collector.

Business was actually quite busy on Thursday and Friday despite some “now shows” and was even good on Saturday.  And didn’t stop up until the time I had to leave for the airport - I accepted a Capped Bust Dime Consignment and sold a beautiful 1825 Capped Bust Half Dollar in PCGS MS64 (CAC) while packing up to head to the airport.  (the "headline coin" for today's newsletter)

And best of all, I saw and talked to a lot of collectors, dealers, and met quite a few new collectors at the show.


wdperki(at)attglobal.net
Posted by Editor, JR Newsletter at 1:29 PM No comments: