Welcome to the "pre-ANA" issue of the JR Newsletter.  Fair warning to readers:  next weekend's issue of the JR Newsletter may be delayed by several hours or maybe even until Monday due to my travel and work schedule.  I look forward to hearing from others about their ANA show experiences.  With auction companies holding some significant sales, a half dollar sale by Sheridan Downey, and a half dime sale by W. David Perkins, I'm sure there will be plenty of tales to be told in the coming month!

Last week there was an announcement to purchase the new Bust Dime Variety Identification Guide from various dealers at the ANA.  I am not going to able to attend the ANA.  From whom will I be able to buy the book when it becomes available?

While we are on the subject of the new book on bust dimes, here's something from David Kahn:

David Kahn (www.DavidKahnRareCoins.com) and Brian Greer (www.BrianGreerRareCoins.com) will be sharing a table at the upcoming ANA Convention in Rosemont,IL, and invite everyone to stop by Table 724 to say hello.  They will have lots of new purchases making their debuts at this show.  Also, the new Bust Dime Variety Identification Guide , just now being published and written by Winston Zack, Louis Scuderi and Michael Sherrill, will be available at their table.  In addition, they have arranged to have all three authors available for a signing session, at table 724, on Wednesday August 12, from 10:00 AM to Noon.  You can buy a copy during that time, or bring the one you bought earlier to have signed.  The authors look forward to seeing you!

Only two doubled edged dollars are known, at least to me.  One, a 1795 B-5 (Flowing Hair) with its edge lettering in opposite directions;  so, upside down from each other.   Second, a 1799 B-11 (Bust) also passed through the Castaing process twice,  same side up.  Images and discoveries by Jonathan Kern. 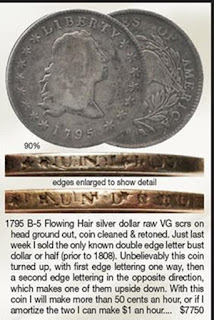 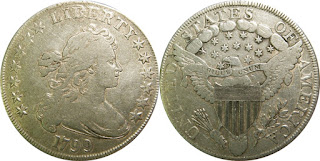 If anyone has an extra copy of Federal Half Dimes 1792-1837 by Russell Logan & John McCloskey and would like to sell it please let me know.  I have a friend that would like to purchase a copy.  I can be reached by e-mail at wdperki(at)attglobal.net

W. David Perkins and Gerry Fortin – Tables 617 & 619 at the ANA Convention
W. David Perkins and Gerry Fortin will have a large selection of early U.S. silver at Tables 617 and 619 at the 2015 ANA Convention in Chicago.  Included is a lovely 1792 Half Disme in PCGS AU50 (OGH)!  We will have a large stock of half dimes to early dollars.
As most JR News readers and early Half Dime collectors know, at the ANA Perkins is holding his third Extraordinary Half Dime Sale, a Fixed Price and Sealed Bid Auction Sale with close to 100 Lots of Capped Bust Half Dimes 1829-1837.  These lots will be available for viewing, study, and purchase at the ANA Convention in Chicago.   You can request a catalog (PDF) via e-mail.
In addition, as previously announced, Perkins will be selling the Kirk Gorman Capped Bust Dime Collection starting at the January 2016 FUN Convention in Tampa, FL.  About a dozen Capped Bust Dimes from this collection will be on display at Tables 617-619 at the ANA Convention.   All of the Gorman dimes have been recently photographed (PCGS TruView Photographs, taken with all of the coins outside of the holders) and graded by PCGS.  You can sign up to be on the distribution list for the Gorman sale at the ANA, or send an e-mail to Dave at wdperki(at)attglobal.net

Dave will have a preliminary  list of the dimes in the Gorman Collection at his ANA Tables including, PCGS serial numbers to facilitate coin / photo look up on the PCGS website.
Please stop by and see us.  See you in Chicago!
W. David Perkins
Gerry Fortin
Thanks,
W. David Perkins
Centennial, CO

Posted by Editor, JR Newsletter at 12:25 AM No comments: