Lots of responses this week to a question posed last week regarding a holed bust dime sold on eBay.  As readers will see, we have some experts who participate here!

Commenting on the 1829 "coin" from eBay, and to answer your questions.  1) The denomination is a dime (which you were probably well aware of). 2) Is it an altered date?  Funny thing about ebay images are that you need to do a lot of self-interpretation - is 'such-and-such' a product of the image (shadow, fuzziness of pixels, etc), or am I REALLY seeing what I'm seeing?  This is a tough one to precisely interpret, but I would say there is a shadow or 'dirt' covering the bottom of the '2' in the date making it appear like the digit is curled. 3)  It is not a JR-10.  It is a JR-3, and you can tell this by how far the top curl of the 2 leans over the bottom base of the two.  Another unique feature of this die marriage is the position of the '9' relative to the lower hair curls of Liberty's Bust.  These two factors narrow it down to the 1829 JR-3 die marriage, unless of course the '2' in the date is curled whereby this would be a new Curled Base 2 die marriage - stranger things have happened, so I'm not ruling out this possibility, but I don't put much weight on it as an outcome!
Best,
Winston
------

I am not sure what it is, but it definitely is not a genuine 29 curl base dime.  The "2" is completely wrong for the variety - a genuine coin has a thin line for the upper curl of the 2 which connects to the knob of the 2.  That 2 is so blundered that I would guess an old altered coin.
Dave Shirlen
------

Hello from Beijing! Definitely not a curl base 2 dime but definitely a bust dime rather than a half dime. The 2 may be altered to look like a curl base but the 9 is positioned incorrectly to be the real coin. The obverse and reverse details, for what little there is of the reverse (the smallish C in 10 C and its position), suggest an 1829 JR3. Not certain what has been done with the 2 but it is way too thick on top and the bottom has been altered from the flat based two of the 29 JR3. All-in-all the curl base on this example doesn't have the same compactness that the real coin has.

When I saw the last JR Newsletter regarding a possible curl base 1829 dime on Ebay I had my doubts, but because of my interest in bust dimes I wanted to make an effort to figure out what it is.  Many times it can be difficult to determine a die marriage, whether it be from bad pictures, extremely worn details or both...my included picture shows one method I use to help me make an educated guess.  Since the letters and numbers of all the early coinage were hand punched into the dies, none of the dies are exactly alike.  What I like to do is use the details I can see on the coin and connect it with a straight line to another given on the coin.  Once you have a few points of reference, you can use pictures of known die marriages to find the coin that matches your points of reference.  In the included photo (posted below...click on the image to enlarge it), I drew a line through S1, S13 and the left edge of the "9"...As you can see, the JR-10 is quickly ruled out.  The quickest way I've found to use this method at home is a straight edge of some kind (I usually use a business card) right on my computer screen!

Being unable to see the reverse details or hold in my hand the coin in question, my conclusion is this is an altered date 1829 JR-3 dime.  I hope others have some input on this coin, or maybe if we are very lucky a member here purchased the coin and can provide better pictures!

I also want to mention that none of the coins in the included image are mine, though I have obtained permission from the current owner of this JR-10 for my message here.

Just as a suggestion, a good way to confirm or deny an attribution is to examine a picture of the genuine variety on a trusted website.  Such websites would include reliable auction houses as well as dealers who specialize in that coin series.

Now on to different topics!

For your viewing pleasure.  Has anyone ever seen a Tiffany & Co. Sterling Silver Money Clip with a Bust Half Dollar?   The initials NRC are engraved on the back.  It's a 1827 O115. 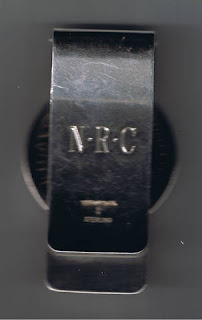 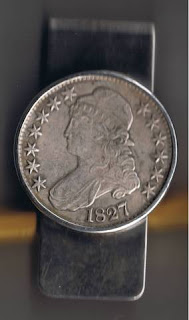 June 16, 2011 a Baker 58 Julian CM  5 , jugated busts of GW & Benj Franklin / 1783  eagle over globe , engraved by John Reich and part of the Jos. Sansom medal series struck circa 1805,  in gem proof silver in the original engraved silver case auctioned for a bit over $21,000 ($18K hammer)  in a small town Pa antique auction. It nevertheless attracted four separate bidders all of whom happened to be on the Balto coin show bourse floor at the time of the PA auction. Ford auction records for a similar specimen approached  $50 grand some 5 yrs ago.

Sept 10, 2011 the owner of a superb silver proof Betts 546 Julian CM 8 , Franklin Lightning Averted.../ Beaver at tree 1776, also part of the Reich Sansom medal series, was on the Long Beach coin show bourse floor and the owner turned down a $35,000 offer. It is the perhaps the  rarest of the six Sansom medals in silver. While Ford cataloguer  Mike Hodder says approx 20 silvers are  known in the Ford Betts II auction, it is in fact known by only 4 or 5  specimens in silver. The only Reich Sansom medal in silver known by 20 specimens (or more)  is the Baker 71 Julian  PR 1  "Presidency Relinquished" silver.
Alan V. Weinberg
------
Clay Blaney wrote:

I enjoy your comments and hope you keep them coming even if you do have other material.

Thanks for your work,

Anyone who would like their Draped and/or Capped Bust Dimes included in the upcoming JRCS census, please send a list of the die marriage and grades of your coins to David Quint at dimecensus@yahoo.com

The census will be published in the next issue of the John Reich Journal.
Posted by Editor, JR Newsletter at 8:34 AM 2 comments: