Here we go with this week's contributions:
Rich Hartzog wrote in response to Dennis Villanucci:
As the publisher of the Brunk books on Countermarked coins, I have a small complaint to make, mostly against large auctioneers.  Once a coin has been stamped, it is no longer a coin, but a token, and any image of it should show the counterstamp in an upright position.   Showing it as a coin makes it difficult to view the now most important part, the countermark.  If you want to sell it as a countermark, align the countermark to be most visible.  A quick glance at the upcoming Stacks sale shows some of the countermark lots (IN the countermark section) to picture the blank side of the countermarked coin (#5002,5006, for example)!  I also note a LOT of incorrect pics, starting at lot #5240.  And, the countermarked items are organized by denomination, instead of by issuer. Most, but not all, of the Stacks pictures are correctly aligned, to show the countermarks. My small rant of the day.  BTW, I still have a small supply of the latest Brunk book on my web site at www.exonumia.com .  Rich Hartzog - World Exonumia
+++
Also in response to Dennis Villanucci, here's what Nathan Markowitz wrote:
On Browning 8 quarter and its counterstamps:
I read with interest the discovery of the counterstamp on an 1806 B8 quarter described here by Dennis Villanucci last week.  This die marriage is my personal favorite and the key to completing a draped bust quarter die variety set.  I commend Dennis on using somewhat obtuse secondary diagnostics to correctly attribute this example without the standout diagnostic deformed "C" commonly attributed to being punched over an "A"...a theory in great dispute.
He shared with me that he found this coin recently in a small shop and used his numismatic "instinct" to correctly pick up the diagnostic R over T which is shared by most of the scarce die marriages of 1806.  Perhaps we will never know what the "NC US" means as he mentioned he thought it might refer to North Carolina. It does appear to my eye an older marking though I don't possess expertise on this subject.  It would be interesting to learn if the seller has any contacts that may prove useful in further pedigree research on this coin. As we know, this more often leads to dead ends but "once in a while"....
My own adventure with an 1806 B8 counterstamp came a few years back at a national show.  By sheer luck I arrived at a dealers table and found an 1806 B8 draped bust quarter with the letter "J" punched strongly in the right obverse field.  The dealer was delighted to sell that "choice" coin as he somewhat sarcastically put it to this very silly collector.  It only proves that one mans garbage may prove another's treasure.  I was simply thrilled.  This example displayed below is easily attributable by all the diagnostics.  It is slightly bent from the force of the punch.  It shows the classic grade differential on the 1806 B8 quarter where the reverse is struck up much stronger than the obverse.  I have noted this on all known examples.  (editor's note:  Nathan has provided us with three images of his counterstamped 1806 B8.  Click on the images to enlarge them) 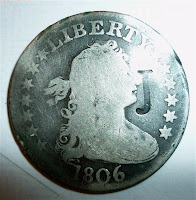 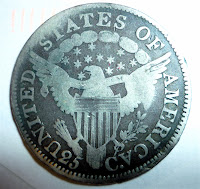 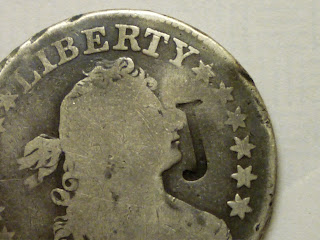 Thanks again to Dennis for sharing his example with the JR world and to Richard for reviving this wonderful electronic venue.
------
Liz Coggan wrote last week:
Just a note to let you know, J.J. Teaparty will be conducting a sealed bid auction for an 1800 LIBEKTY LM-4, R-7 Draped Bust half dime.  This coin is very choice Fine in grade with claims to VF--in fact it could be argued that the coin is VF.  The sealed bid sale will be held at the November Whitman Baltimore Show on Friday afternoon at 2:00 pm.  We will have the coin on display at the show for anyone to review.
Also if you plan to attend the Philly Whitman show and would like to see the coin there, I will have it there on display for you to look at.  Please feel free to call me or email me with any questions:  liz@jjteaparty.com  1-800-343-6412.
Editor's Note:  I posted images of this coin in a special blog article below!
------
Brad Karoleff wrote:
The John Reich Journal was awarded a first place award from the Numismatic Literary Guild for best small club publication for our December 2009 issue at the recently completed ANA show in Boston.  We actually tied with Curry's Chronicle, Carson City Coin Collectors of America Summer 2009 issue edited by Rusty Goe.

You too can be part of an award winning team.  Write something for the next issue of the journal and you may become part of history.  I would like to have enough for an issue before the Christmas season, but the cupboard is pretty bare!  Please take some time to finish that project you are working on, or begin one for submission.  You can send them to me either at JRCS PO Box 135 Harrison, OH 45030, or by email at  JRCS19 (at) roadrunner.com
------
Richard Meaney wrote in response to Brad Karoleff:
The pattern Brad followed in collecting coins in the VF range as he started out and then resetting his goal higher as he gained expertise is a familiar one.  When I decided that I wanted to collect capped bust half dimes by die marriage, I chose the first example that I could find of each die marriage, even if it was of hole-filler quality.  As I advanced in my collection, I set VF as my goal, then XF.  Today, I have tiered minimum goals based on rarity:  For common die marriages, I want AU coins.  For R-5 die marriages, I want XF coins.  For R-6 and scarcer die marriages, I want VF coins.  I still have some problematic coins in some tough spots, but that's the nature of the hobby.
A final note from the editor:
For those of you that wrote in asking for back issues of the JR Journal, I wanted to let you know that your orders have been filled if the issues you asked for were some of the more common/recent ones.  For those of you who have asked for some of the hard to find/older issues, we are in a temporary holding pattern on these as we iron out some pricing concerns on the older issues.  The JRCS Board will establish pricing for some of the highly-sought-after older issues before allowing them to be sold to the collecting public.  Sorry about any delays.  No need to re-send your requests.
Posted by Editor, JR Newsletter at 9:43 AM No comments: