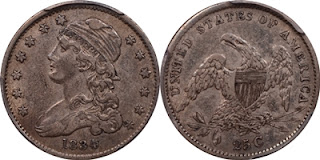 We have an original article by David Finkelstein and two additional contributions that are of special importance to those people who are planning on attending the Baltimore Spring Expo.

David wrote, "The First Depositors of Silver & Gold – Part 3."  You may access David's work by clicking the following link:

Next, from Garrett Ziss:


Since the Baltimore Whitman Expo is coming up soon, I’m writing to let JRCS members know about an interesting numismatic display only a short drive from the convention center, at the Maryland Historical Society.  The exhibit, Treasures Unearthed from Baltimore’s Washington Monument, includes the contents of 2 time capsules that were discovered during the renovation of a George Washington memorial, located just a few blocks from the museum.  The older capsule, from 1815, includes 10 Early U.S. coins (3 gold coins, 5 silver coins, and 2 copper coins).


After the Baltimore Whitman Expo last November, I visited the Maryland Historical Society and really enjoyed this exhibit.  I took numerous photographs of the obverse of the coins from the time capsule.  However, as a JRCS (and EAC) member, I was disappointed that the coins they displayed were not attributed.  With approval from the JRCS officers, I wrote a letter to the museum asking whether it would be possible to obtain reverse images of the coins in order to attribute their die marriages.


Alexandra Deutsch, the Chief Curator, responded to my letter.  She reported that they currently do not have reverse images of the coins, but she generously offered to have them photographed and sent to me when the exhibit concludes.  Once I obtain these images, I will attribute the coins, have the die marriages confirmed by other JRCS/EAC members, and then send this information to the Maryland Historical Society.  The results will be presented in the John Reich Journal and/or a Baltimore JRCS meeting (although probably not until late 2016 or 2017).


The Maryland Historical Society also has the oldest known surviving manuscript of  “The Star-Spangled Banner,” one of only three surviving Revolutionary War officer's uniforms in America, and the world’s largest collection of paintings by members of the Peale family.  Their website is www.mdhs.org.  The website does not contain information on Treasures Unearthed from Baltimore’s Washington Monument.  However, Ms. Deutsch assured me last week that this exhibit will be on display for several months.  I hope many of you will be able to take a break from the bourse floor and visit this impressive museum. 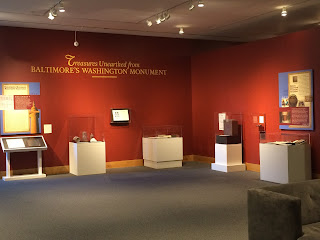 Next, Glenn Peterson wrote with an important opportunity for JRCS members and other interested collectors who plan to attend the Baltimore Spring Expo:

Hi JRCS members.  We will have a regional meeting of the John Reich Collector's Society at the Baltimore Whitman Coin show on April 1st at 4:00 pm. Brad Karoleff asked me to chair the meeting and give a program. I thought an interesting program would be a presentation and discussion of the "E" and "L" quarters of 1815 and 1825. Much has been written about the possible origins of these counterstamped quarters and the subject should provoke lively discussion.


I have just sent my dimes and quarters to PCGS for encapsulation and may bring a few bust dimes with CUDS as well. I hope to see many of you in Baltimore.


Editor's Note:  Dr. Peterson provided his certification numbers to me so that I could show photographs of his "E" and "L" quarters and a couple of his quarters with cuds.  The photos are shown below.  If you wish to view larger versions of these coins (and can't make it to the Baltimore Spring Expo to view them in person), just use the certification number shown in the images to access photos via the PCGS certification number verification page:  http://www.pcgs.com/cert/ 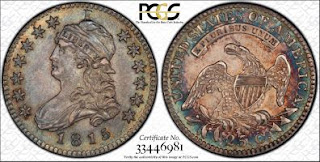 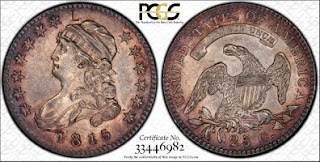 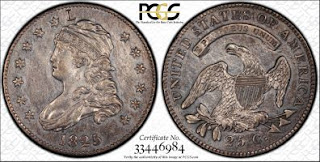 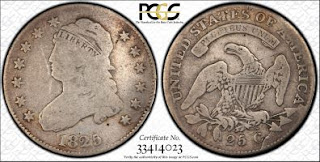 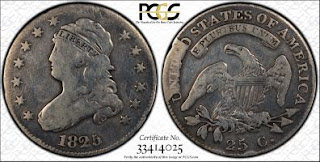