Editor's Note:  You may have noticed that I delete the @ symbol from email addresses on this blog.  I do this so that spammers can't easily grab email addresses and send junk to various email accounts.
Also, the JR Newsletter welcomes FUN Show reports!  Whether you spent an hour on the bourse or spent an entire week in Tampa for the pre-FUN activities and the full FUN Show, I'm sure others want to hear about your experiences!
Jim Matthews wrote:
I've submitted quite a number of interesting books, catalogs and numismatically related items to the David Sklow sale closing February 12, 2011. Lot 496 is a complete set of John Reich Journals from the first issue through January 2004--a set of these is rarely offered!
I'm still looking for the 1827 JR-14--anyone found the second one yet? I thought I was doing well in 2010 to finally obtain a decent example of the 1827 JR-2 dime, and then another 1827 variety turns up....Man it's one step forward, and another one back!
I don't know much about the new merger between Stack's and Bowers and Merena, it was announced late Wednesday December 22nd as everyone in the office was trying to complete the Americana Auction cataloging and head off for the holidays, after days of long hours and hard work for all. Chris Napolitano is a solid leader and we're excited to see how far our combined companies can grow!
Wishing all a Happy New Year!
Jim Matthews
------
Rich Hartzog wrote (in response to a question regarding availability of an "Early US Dimes" book:
While I do not have this, I do have the Quarterman publication: "The United States Half Dimes" by Valentine.  Brand new, direct from Quarterman.  Write me direct for prices and availability.  Rich Hartzog <hartzog (at) exonumia.com>

Rich Hartzog
AAA Historical Americana - World Exonumia
POB 4143 Rockford IL 61110 (815)226-0771
http://www.exonumia.com hartzog (at) exonumia.com
------
Jeff Reichenberger wrote:
Regarding the EAC/JRCS Happenings. I had the pleasure of attending and helping out at one of these and I could not have asked for a better experience. I urge anyone who has the opportunity to get there, don't pass up the chance!  I know there has been some discussion for Early Half Dollars to include at the happenings, I'd like to nominate the 1808 O110. I'd love to see the die state progression, particularly the Star 7 crack, on a bunch of these coins side by side.
------
Liz Coggan wrote:
Rare 1801 Draped Bust half dime LM-1, R-7 to be auctioned in a sealed bid sale at the FUN show in Tampa, FL
Please note, we will be conducting another sealed bid auction for another rare variety in the Draped Bust half dime series at the FUN show in Tampa, FL in January. We will be selling the 1801 LM-1 Rarity-7 which is VG-8 in condition. As you can see the coin is dark and difficult to photograph, so we encourage you to review the coin in person in Tampa. We will have the coin at our Table #1119. The bidding will commence at $6,500. Please contact me if you have interest in bidding and if you desire further details.  Bids will be accepted up until 2:00 pm on Friday, January 7, 2011.  Bids can be submitted via phone at 617-821-8430 (my cell); 1-800-343-6412 (the office) or via email at liz@jjteaparty.com. Good luck and see you at FUN!
Best wishes,
Liz Coggan, J J Teaparty, Inc. 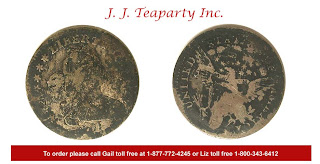 ------
Richard Meaney and Brad Karoleff wrote:
We encourage readers of the JR Newsletter to submit names for nomination to the JRCS Hall of Fame.  Two people will be selected for entrance to the JRCS Hall of Fame and names will be announced at the JRCS meeting during the ANA Show in Chicago.  There are two categories for which we seek nomination:  (1)  "JRCS Era" for people active in the hobby during the era in which the JRCS has been an active society, and (2) "Pre-JRCS Era" for people active in the hobby prior to the JRCS coming into existence.  As an example, Daniel Valentine (pre-JRCS Era) and Russ Logan (JRCS Era) were selected for the JRCS Hall of Fame in 2010.
------
Paul Hybert wrote:
2011 Summer ANA Call for Exhibits

The ANA's 2011 Anniversary convention will be held in suburban Chicago
on August 16-20, Tuesday through Saturday -- next to O'Hare airport, at
the same venue as in 1991 and 1999.  The ANA has some information
already on their web site, including hotel information. The Exhibits
Local Committee is looking for new, lapsed, and returning exhibitors.
Send all questions to us at
ANA2011Exhibits (at) ChicagoCoinClub.org

The key ingredient for an exhibit is information. Think of your favorite
area in numismatics. You have acquired some interesting pieces, a few
stories, and have an idea of how it all goes together. All the makings
of an interesting exhibit! JRCS members were among the exhibitors in
2010 at Boston ANA; we identified some prospective exhibitors while at
the 2010 CSNS and ANA conventions, so now we have to close the deal and
find even more exhibitors. The URL for the main ANA exhibiting page is

Direct links to useful pages at ANA can be found on the page of the
Local Exhibits Committee
http://www.chicagocoinclub.org/events/2011/ana/lo/collector_gallery.html
and that page will be updated as more information becomes available.
Exhibiting does take a commitment of time -- the exhibits must be in
place by the early Tuesday afternoon opening of the convention, and the
exhibits cannot be removed until very late on Saturday afternoon (when
the convention closes). It is possible to use an agent for setup or
takedown, but that option has been little used during the last few
years. If you cannot stay all week, but do live not too far away, maybe
you could make two trips -- on PNG-day (or that evening, after work)
for setup, and on Saturday for the takedown.

Do not despair if you have a great idea for an exhibit but will visit
for only a day or two -- have you considered speaking at the Numismatic
Theatre? Each program typically starts on the hour and lasts about
30-40 minutes, and is followed with a time for questions from the
audience. In Boston, Brad Karoleff led a panel discussion on the early
U.S. mint -- the two hour program ended before all Busties topics were
covered, so maybe we can look forward to a continuation in 2011. Send
your questions to the Numismatic Theatre Local Committee at
ANA2011Theatre (at) ChicagoCoinClub.org
Posted by Editor, JR Newsletter at 9:00 AM No comments: